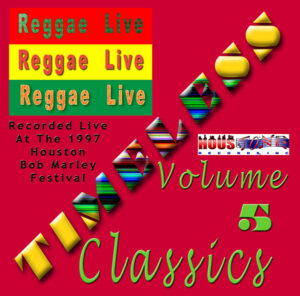 Check out details on www.lorrf.com, www.legendsofrastareggaefestival.com. For the thousands who have attended the Festival and enjoyed in the Spirit of Love Unity and Peace Gold that is generated by the performances of the bands, but also from the warmth and love shown for each other has always been special; and those fans will really enjoy and appreciate Reggae Live Vol. V, from Houstone Records, Timeless Classic series. For those of you that have not had the blessing to attend the Festival; Reggae Live is the closest experience to understanding the enjoyment and Good Karma the Festival shares.

Just listen to the inspirational warmth and spirit of each of the performances by Pato Banton, Michael E. Johnson & The Killer Bees, Mrs. Cedella Marley Booker, Michael Black, Errol Blackwood, Ben Hunter, performing a mixture of 10 covers and original songs that will bring joy to your heart and soul. Rat Race, Jammin, El Paso, House That Bob Built, When The Saints Go Marching In, Bible Chant, Fly A Way Home, Give Peace A Chance, Grooving On A Sunday Afternoon

Many people around the world enjoy and listen to reggae; but many others that have not really listen to reggae music, mostly because they cannot understand the music and what the artist is singing. That is no longer a problem as Reggae/World features all well-known songs performed by Reggae and World artist from around the world. This CD is great for theme pool parties or just enjoying the great vibes and feeling that Reggae and World music offers from songs you know.

About
HousTone Records does not except unsolicited material. Artist can submit a request to have, 3 songs reviewed and one of the three must be a well-known cover song. Submit request by E-mail only but hard copy promo package must be sent by regular mail only.

HousTone Records: Making a difference by Marketing, Recording and Distributing One Act at a Time!

PATO BANTON (Roots Reggae); (Birmingham, England, Roots Reggae) Grammy Nominated artist offering spiritual, conscious, uplifting reggae to the World Patrick Murray was born in London in 1961, and moved to Birmingham when he was 8. The house in which they lived became the local night spot during the weekends and Pato worked his way up from working on the door at the age of 9, to setting up and operating the sound system by the age of 13. By the age of 15 he started to gain his grounding in music on his stepfathers’ sound system called V-Rocket. Patrick would stay up all night entertaining the masses and was given the name Patoo by his stepfather. (The name derives from a small night owl in Jamaica that stays up all night, calling “patoo, patoo.”)

Malcolm “Papa Mali” Welbourne Killer Bees (born May 6, 1957) is an American record producer, guitarist, singer, and songwriter who grew up in Shreveport, Louisiana, United States, and lives in New Orleans, Louisiana, United States. A trip to Jamaica in 1977 exposed him to reggae music, and a few years later he teamed up with Michael E. Johnson and formed The Killer Bees in 1980. They continued to play for many years, eventually becoming one of the first American bands to perform at Reggae Sunsplash in Montego Bay, Jamaica in 1988. Earlier, while on tour with Burning Spear aka Winston Rodney and his band, he received the nickname, Papa Mali from the reggae pioneers. By the time the Killer Bees disbanded, Papa Mali went solo.

Song By Killer Bees “El Paso” is a country and western ballad written and originally recorded by Marty Robbins, and first released on Gunfighter Ballads and Trail Songs in September 1959. It was released as a single the following month, and became a major hit on both the country and pop music charts, reaching number one in both at the start of 1960. It won the Grammy Award for Best Country & Western Recording in 1961, and remains Robbins’ best-known song. It is widely considered a genre classic for its gripping narrative which ends in the death of its protagonist, its shift from past to present tense, haunting harmonies by vocalists Bobby Sykes and Jim Glaser (of the Glaser Brothers) and the eloquent and varied Spanish guitar accompaniment by Grady Martin that lends the recording a distinctive Tex-Mex feel. The name of the character Faleena was based upon a schoolmate of Robbins in the fifth grade Louis Meyers Manager & One Of The Founders Of The SBSW

Errol Blackwood (Jamaica, Toronto, Canadia; Roots Reggae) Born in Accompong (Maroon) Hills of Jamaica and raised in Canada; In 1980, Errol formed Messenjah, along with Ray Ruddock and Rupert Harvey and although he now performs solo his search to spread the message of unity and peace. His music is an influence of Jamaican folk song (digging songs) gospel music, country and funk. Errol’s conscious writing it is quite pleasant and kind of eerie that he sounds so much like Bob Marley’s voice lyrics, etc. Winner of the Juno Canadian Music Award. (Canada’s version of the Grammy)

At 18, Cedella Malcolm married Norval Sinclair Marley, a white Jamaican of British and rumored Syrian Jewish [2] descent, whose father’s family came from England; the family of his mother, Ellen Marley (née Broomfield), came from the Levant. [3] She became pregnant with his son, Robert Nesta (whose second given name “Nesta” means prophetically “wise messenger”). Norval Marley was an officer as well as the plantation overseer. His family applied constant pressure however, and although he provided financial support for them, the Captain seldom saw his wife and son. [4] Bob was ten years old when

PATO BANTON (Roots Reggae); (Birmingham, England, Roots Reggae) Grammy Nominated artist offering spiritual, conscious, uplifting reggae to the World. Patrick Murray was born in London in 1961, and moved to Birmingham when he was 8. The house in which they lived became the local night spot during the weekends and Pato worked his way up from working on the door at the age of 9, to setting up and operating the sound system by the age of 13.

By the age of 15 he started to gain his grounding in music on his stepfathers’ sound system called V-Rocket. Patrick would stay up all night entertaining the masses and was given the name Patoo by his stepfather. (The name derives from a small night owl in Jamaica that stays up all night, calling “patoo, patoo.”)
(Festival Backing Band)

The Shepherd Band (Festival Backing Band), (Reggae), Big Easy Entertainment Awards Past Winners For Best World Beat/Reggae Group, 1995 & 1996, (NEW ORLEANS, LA. DANCEHALL REGGAE) OVER THE LAST 10 years if You say Reggae Music in New Orleans and most people will mention and be reminded of Higher Heights (formally Irie Dawtas and, Dawtas of Jah) Known all over America as one of the top Reggae Club and back up bands around.

In 1992, Ben’s second album, Reality Check, was released and was recorded with the Crucial Roots Band, a local reggae band he had been collaborating with for some time. In the early 1990’s, they appeared regularly at Cafe Brasil in New Orleans, doing both covers versions and originals. The band decided to cover The Melodians’ “Last Train to Expo ’67.” This album also features a cover version of Jimi Hendrix’s “Hey Joe”: “I always loved Jimi Hendrix and “Hey Joe,” so I wanted to cover it because growing up, my aunt would play it over and over when she watched us; so it stuck….” The album also contained a track entitled “Inna Citi,” which dealt with social barriers in New Orleans:

“In New Orleans, there’s some community that you have to go through a guard’s gate to enter. That keeps us separated. “In the 1990’s, Ben took part in the Bob Marley Fest tour, which was a good platform for his art and allowed him to play in such places as Phoenix, Arizona, and to meet such reggae luminaries as Joe Higgs. Out of this experience came the Live Intergalactic album, which was recorded, on that tour.

Michael Black, Jamaica, Chicago, Ill, (Roots Reggae): I considered the Moses of Reggae Music, and one of the best live performers in reggae music. His music is all about love, peace and unity in the image of Bob Marley and Burning Spear. Michael Black has been a Headliner on many Festivals around the world including The Annual Bob Marley Festival Tour